The justice system has taken the idea of zero tolerance in domestic assault to such an extreme that it’s unfair to defendants and no longer works in the best interests of Ontario families, says a 40-year veteran of criminal law. 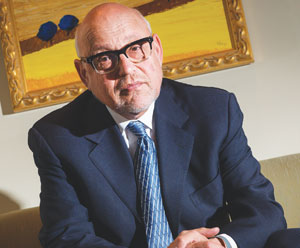 It’s an opinion, however, vociferously opposed by at least one lawyer who helps victims of domestic violence.

Leo Adler, of Adler Bytensky Prutschi Shikhman, says the issue of domestic assault has become “political football” over the last 25 to 30 years with largely undesirable results.

While Adler emphasizes he doesn’t want to diminish the tragedy of family violence, he says the situation has now reached a point where police called to family violence situations are unduly afraid to release the defendant even in cases that don’t appear serious. “Nobody wants to be the person who says, ‘O.K., I’m going to release you,’ because you might be the one in a million or whatever the statistic is who might end up killing your spouse,” says Adler.

“In a lot of these cases, there’s no sign of violence, there’s no sign of anything having occurred. You simply have the word of the complainant. And the person gets arrested and I can tell you that again in the majority of cases, the police don’t even bother to try to take a statement from the accused, usually the male. . . . They don’t ask because it doesn’t make a difference because they’re going to arrest you no matter what.”

Bail hearings in domestic violence cases, he says, are “always run on the presumption of guilt” and, if the court does grant bail, it’s generally under strict conditions with the defendant required to live with a surety. The result, according to Adler, is often a divided family with the added financial strain of having to pay for two residences regardless of whether the victim is under a real threat or not.

“The pendulum has swung too far,” says Adler. “The concept of zero tolerance is admirable, but that presumes that everyone who makes a complaint is not only telling the truth 100 per cent of the time but is perceiving it properly and doesn’t have any motivation to lie. The way the current bail works just hurts everybody.”

Instead, Adler says, the system should make a sharper differentiation between serious incidents where there are “ongoing abusive issues” and cases involving first-time offenders dealing with less serious incidents such as pushes, shoves, and “so-called threats.”

Family lawyer Murray Maltz agrees with Adler that the pendulum has swung too far in the family law sphere as well. “Despite the idea that it is an allegation that the individual has committed an assault, in family law purposes they will err on the side of caution in many cases . . . to ensure that he is removed from the house and it certainly plays a role in cases of custody and access,” he says. “You have to have zero tolerance . . . but in many many cases it is used to obtain financial advantage or advantage concerning children in the family courts.”

Adler’s views, however, meet with strong disagreement on the part of at least one advocate for victims. “None of these things are true in my experience,” says Mary Lou Fassel, director of legal services at the Barbra Schlifer Commemorative Clinic that provides help to women who have been victims of domestic violence.

Family violence has indeed become a political issue, says Fassel, due to the need to better protect women and children from harm. Fassel says it’s simply not true that police called to the scene of an alleged domestic violence offence don’t listen to the alleged perpetrator. “Most of the time, our clients — and we do have a particular client group who come to us for assistance when they’re having problems in the criminal justice system — their experience generally is that the police don’t want to listen to them, that they speak with the alleged abuser, they do hear his side of the story, and quite often they don’t lay charges at all. So my client group would have the exact opposite experience.”

When police arrest someone over an alleged incident of domestic violence, she says, they usually do so with good reason. And the system, she adds, already differentiates between very serious and less serious cases. For example, in cases where the defendant has a criminal record or has allegedly assaulted the victim with a weapon, the court may not grant bail. But for those who don’t fall into that category, it will generally grant bail with the defendant required to stay away from the alleged victim.

Police use tools to assess the likelihood of the accused committing further violence and the risk, according to Fassel, covers much more than the issue of defendants simply wanting to kill their spouse.

“In the vast majority of cases, there isn’t going to be any risk of lethality. That’s probably true . . . but there could be some other very serious risks of harm, including harm to kids,” she says.

The system, according to Fassel, also contains generous allowances for spouses who want to reconcile with each other and victims who decide they don’t want to have the defendant separated from the family.

“The defendant can always bring a variation application for bail and if his partner really believes that the charges by the police were unjust or misguided or heavy-handed, she can always appear at a bail hearing and give that evidence,” says Fassel.

“Generally speaking, those cases aren’t going to result in charges by the police,” she adds. “But if they do . . . in those kinds of situations, in my mind, there’d be no way that a prosecutor would persist in a vigorous prosecution.”

Fassel also sits on the community advisory committee for Ontario’s integrated domestic violence court. The court, she says, has a lot of potential to successfully resolve less serious cases. “It’s generally going to be inclined to dismissing criminal charges against offenders because what they’re really trying to ensure is . . . protection of the women and her children into the future but also ensuring the individual offender continues to have some rights to continue a relationship with his kids.”