A Crown lawyer is seeking sexual assault charges against a pair of Toronto police officers, saying they subjected him to an unnecessary strip search beyond their authority. 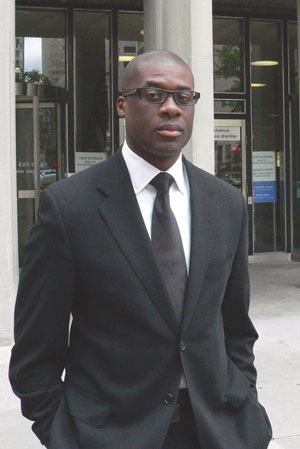 Roger Shallow, 37, last year took the claim to Justice of the Peace David Hunt, who denied the request for the laying of charges.

Shallow was back in court at 361 University Ave. last week, with his lawyer Donald McLeod, requesting that Superior Court Justice Ian Nordheimer return the matter to provincial court based on allegations that Hunt - a former lawyer who released 77 pages of reasons for his decision - made errors.

Hunt heard the matter during a three-day pre-enquÃªte. Shallow is now seeking an order granting mandamus with respect to that hearing.

The allegations stem from Shallow’s October 2007 arrest in Toronto’s club district for causing a disturbance and assault to resist arrest. McLeod said after the arrest the black Crown lawyer was unlawfully subjected to a strip search in which he was forced to “manipulate his sexual organs.”

Shallow previously had assault charges laid against the officers who arrested him during the incident. Those charges were dropped earlier this year as requested by British Columbia lawyer Richard Peck, who took over the case for the Crown as special prosecutor. Peck said there was no reasonable prospect for conviction.
The charges against Shallow have also been dropped.

McLeod claimed the circumstances surrounding the strip search do not amount to a “traditional” sexual assault. He argued that the “level three” search was not necessary and that the officers had acted beyond their lawful authority in conducting it, raising the matter to the level of sexual assault.

While taking such a complaint to the Police Services Board is an option, McLeod said the public has the right to seek criminal charges also. He argued that when police act outside of their legal authority, they must be “treated as laypersons.”

He suggested that the idea of keeping complaints against police within the PSB process is akin to remedying an incident of sexual assault via a family meeting.

McLeod argued that police had already searched Shallow, and that it was clear he would be released from custody. He said the officers’ decision to conduct a strip search was “far afield” of what was necessary to ensure officers’ safety.

But lawyer Patrice Band, acting for the Crown on the matter, argued that Shallow’s allegations of sexual assault faces “insurmountable hurdles.” He said the circumstances of the incident were “quite sterile” - the officers wore gloves, the mood in the room at the time of the search was calm, and the door was open.

He said those factors suggest the search was not conducted in a sexual nature.
Further, he said neither officer made a threat or gesture necessary for a sexual assault finding.

Band suggested in his factum that, “Pared down to its essentials, the applicant’s request is that this honourable court interpret, or mandate the interpretation of, the Criminal Code offence of sexual assault so as to read-in certain elements of the offences of sexual touching, sexual exploitation, or sexual exploitation of a person with a disability: viz. the elements of a young or disabled complainant and the existence of a power imbalance as between the accused and the young complainant.”

He later wrote, “Or, put another way, the applicant - an adult in his mid-30s who does not suffer from any disability - seeks to convince this honourable court to interpret the Criminal Code offence of sexual assault so as to include a request for, invitation to, or counselling of sexual touching in circumstances involving an adult complainant and an absence of direct or indirect physical contact or words or gestures amounting to a threat.”

In court, Band suggested that if McLeod’s arguments are accepted, any unlawful police strip search would be considered a sexual assault.

McLeod disagreed. “This is not the creation of a new criminal offence - it is a criminal offence,” he told the court, adding that there exists at least prima facie evidence of sexual assault in the case.
Nordheimer reserved his decision on the mandamus order.

He said the public doesn’t necessarily have the right to know that certain allegations have been made.
But Nordheimer seemed to disagree.

He noted that the police often release the name of accused persons through press conferences or releases before their allegations have been proven. He added that there are various instances in which individuals face unproven allegations in the public domain.

“That’s the world in which we live,” said Nordheimer.
McLeod based his request for withholding Shallow’s name from the record on the “sensitive nature” of the allegations he has made.

But Nordheimer noted that the matter was before the court at Shallow’s request. He said it’s vital that individuals who initiate lawsuits consider the possibility that the matter may be published.
Nordheimer ruled that the “high hurdle” required for a publication ban on the names had not been met.

The officers are identified in court documents only as “Toronto Police Officers Lyon and Harnish,” with no first names.
Shallow is also pursuing the matter at the Human Rights Tribunal of Ontario. He filed an application in October 2008 that alleges his treatment from the officers during his arrest were affected by his skin colour.
Clarification: The article "Did cops assault Crown?" should have made clear that lawyer Patrice Band suggested the public does not necessarily have the right to know the names of officers against whom certain allegations have been made.