‘We can do better’

The main threat to professionalism in the legal industry is big firms’ profit-first approach, according to Ontario Court of Appeal Justice Stephen Goudge. 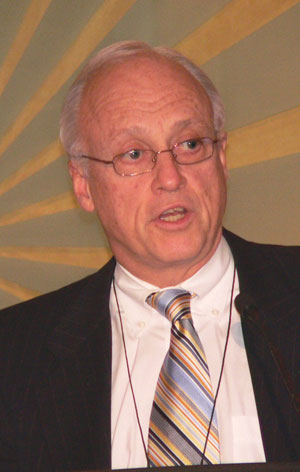 “Will lawyers increasingly see anything but the narrowest aspects of professionalism, such as the most minimal compliance with the rules of professional conduct in order to escape the discipline process, as a luxury they can no longer afford in the frantic scramble to do law as business?” pondered Goudge at a symposium hosted by the University of Toronto Faculty of Law’s Centre for the Legal Profession and organized by the Chief Justice of Ontario’s Advisory Committee on Professionalism.

Goudge quickly went on to acknowledge, “That’s a negative image. I want to say immediately that, for me, that is a reality. That is, law as business. For those of us that want to enhance the professional responsibility that goes with the practice of law, working with that, as opposed to decrying it, is something that is absolutely essential.”

The Symposium on Lifelong Learning in Professionalism featured panel discussions led by legal scholars, judges, and lawyers. It ended with Goudge’s delivery of the 2009 Annual Goodman Lecture.
The judge suggested that the battle for common standards of professionalism can be traced to the transformation of the legal industry over the past half-century.

He noted that the Law Society of Upper Canada’s Rules of Professional Conduct were for some time “the paramount means of communicating what one did to manifest professional values.” That gave way to an era of a “shared professional culture,” said Goudge, adding that the onset of more specialized legal practices detracted from that.

“While there remain fundamental values that all lawyers should share, the sense of diversity of practice makes this challenge of lifelong learning a little starker than it was in the past.”
While a lot has changed in the past 50 years, Goudge outlined a set of key challenges to professionalism.
The largest hurdle, he said, is the business model of the practice of law.

“While there’s always been tension between the commercial dimension of law and its professional dimension, the last 25 years has seen changes that are of a wholly different order of magnitude,” he said.
“We’ve seen the rise of the national megafirms with their magnetic allure for the best and brightest of the younger members of our profession.”

Goudge said for such firms, “The measure of success becomes profitability. Income expectations become the primary driver of legal activity. Billable hours come to reflect the lawyers’ ability to serve the needs of the clients and the justice system.”

The growth of specialization in the profession also poses a threat, he said. “Lawyers no longer all share an identical professional culture, at least compared to an era of a simpler and more homogeneous bar,” said Goudge.

“This comes at some cost to what was once an easy medium for the transmission of what remained for all of us common professional values.”
The final challenge to professionalism, said Goudge, is the growth of the size of the bar. A consequence of this expansion, he suggested, is that there are now fewer “modern heroes” in the profession.

“We cannot look as we might have in the past to role models and mentors to play quite as central a role in spreading professional values,” he said.

University of Toronto law professor Michael Code reminded the symposium of the report last year from he and former Ontario Superior Court chief justice Patrick LeSage on complex criminal cases. That study pointed to a need for all players in the justice system to enhance professionalism.

Law schools must train students on the subject, judges must uphold the standards in their courts, law societies must take a strong stance to punishing abuses, and employers like the Ministry of the Attorney General and Legal Aid Ontario must also enforce standards, said Code.

Ongoing learning in professionalism for practising criminal lawyers may need to be offered by organizations other than the Criminal Lawyers’ Association and the Ontario Crown Attorneys’ Association, said Code.

His report found that the two groups’ conflicting ideologies make it difficult for the two sides to come together in such settings, he noted. Code suggested that law schools and the judiciary come on board to offer programs for both sides of the courtroom.

Laurie Pawlitza, chairwoman of the law society’s professional development and competence committee, told the symposium that the regulator faces a number of challenges to ensuring professionalism.
She noted that those who need continuing legal education programs the least are the most likely members of the bar to take them.

She said that the LSUC can make legal education mandatory, but it’s impossible to know whether a lawyer has internalized the material they’ve been presented.

“If we’re really serious about it, surely one of the things we’re going to have to begin to think about is whether or not we are going to test on mandatory continuing legal education or professional development,” she said. “Is that an option we want to pursue? That’s for another day, and certainly another debate in Convocation.”

Pawlitza said that a mentoring system is not possible, as there are about 40,000 lawyers in the province and nearly 1,500 new ones are called each year. She suggested that individuals flagged by a practice management review could be paired with a mentor.

Meanwhile, in an interview with reporters before the symposium, Goudge said lawyers must do a better job revamping their knowledge of professionalism throughout their careers. He said it doesn’t make sense for law schools to spend time sensitizing students to these issues only to cast the subject aside when they begin practising and face first-hand challenges.

“You need to have mechanisms in place to keep us all thinking about what the new issues are in legal ethics and professional responsibility,” he said. “Partly because the problems keep arising over the course
of a career, partly because the world changes from time to time.”

Goudge suggested that training in professionalism means anything from sensitizing lawyers to issues of conflict of interest, confidentiality, and independence - saying what your professional judgment requires, not what the client wants to hear. It also involves more substantive issues, such as ensuring access to justice.

“But it all has to do with the notion that being a lawyer is not simply holding a job,” he said. “It’s actually being part of a profession that is given a stature and a certain prestige and, in return, has a certain service component.”

The “systemic dimension” of the issue, said Goudge, is the need for the public to have confidence in the justice system.

“So far as that public confidence wanes, we lose that element of the foundation we need,” he said. “The justice system is only going to work so long as the public has confidence in it.”

Goudge avoided a critique on just how bad the lack of professionalism has become, opting to say, “We can do better.”
- with files from Gretchen Drummie