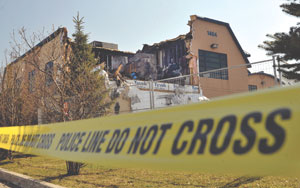 Last Monday at 8:09 p.m., Oakville authorities received a call that a fire had broken out at 1464 Cornwall Rd. The building is where the Oakville office of Will Davidson is located.

“It was pretty extensive,” says Andy Glynn, deputy fire chief of the Oakville fire department of the damage caused by the blaze.

“We plugged the entire loss of the entire building and contents at about $500,000. There is obviously a lot of fire damage, but substantial water damage as well, and smoke damage throughout the remainder of the building.”

Glynn notes the law firm, which is on the second floor of the building, was heavily damaged and close to where the fire was. “A large section of the building was severely affected and in fact the roof has caved in,” he says.

Authorities got word of the blaze approximately one hour after the last person had left the building.

The cause of the fire isn’t immediately apparent and the Ontario Office of the Fire Marshal is looking into the incident. The fire met the criteria to bring the office on board mostly due to the dollar value of the damage. An investigator has been assigned.

“They [were] there on scene [last Tuesday], but because of the damage, they have to wait for some heavy machinery to start peeling back the building before they can enter in,” says Glynn.

Sgt. Dave Cross of the Halton Regional Police Service says that the arson unit is also aiding in the investigation. While there’s no real suspicion of foul play, the time of day the fire started and the length of time between then and when it was reported have investigators asking questions.

“There were still people around,” says Glynn. “Generally speaking, the fires at three in the morning, nobody’s around so the fire can really get a head start. But at that particular time of day, there are still people driving around and in parking lots.”

Glynn didn’t say exactly how long the fire had been burning before authorities were called but notes it had been going on for a while.

No representative from Will Davidson was available for comment.
One woman was taken to Oakville-Trafalgar Memorial Hospital for minor smoke inhalation. She wasn’t inside the building during the blaze.