Raising concerns about the potential for a two-tiered system under a new licensing option for law graduates, a minority on the Law Society of Upper Canada’s articling task force is rejecting last week’s proposal for a law practice program in favour of doing away with articling altogether. 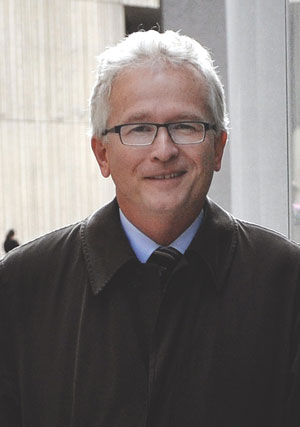 “Articling has really outlived its usefulness and it’s time to move on with a different process,” says Bencher Peter Wardle, a member of the minority on the articling task force that opposed the report’s main recommendation of a new law practice program.

The task force released its final report last week with recommendations to resolve the current articling crisis in Ontario. It also included opposing views from some of its members who want to abolish articling and implement a two- to three-month “comprehensive transitional prelicensing program” that would consist of online learning and exams to assess the core competencies lawyers need to have.

The remaining members of the task force want to introduce a five-year pilot project, to begin in 2014, for a law practice program as an alternative option to the current articling system. The report suggests that option would provide a way for unplaced candidates to gain the necessary practical skills.

Under the new system, licensing candidates would still have the option to article. The majority on the task force also called for a final assessment for all candidates, regardless of the option they choose, to test their practical skills before receiving their licences. 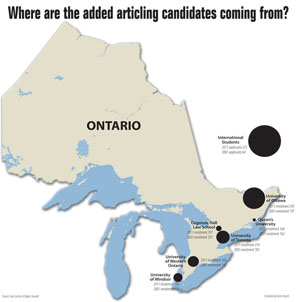 The law practice program, to be delivered by one or more third-party providers, would combine a skills-training component and a co-op work placement for a total of eight months.

One issue the entire task force agreed on is the notion that the status quo can’t continue.

But Wardle, a partner at Wardle Daley Bernstein LLP, says it’s not necessary to study articling for another five years.

“The time to make the hard decisions about articling is now,” he says.

“This is really the first time that we’re aware of in North America certainly that a law society or a regulator of the legal profession has actually decided that it will try to apply the latest in objective assessment techniques to measure the effectiveness of a practical training program,” he says.

The minority — consisting of benchers Jacqueline Horvat, Vern Krishna, Paul Schabas, and Wardle — disagrees with the proposed pilot project, insisting that there should no longer be an articling requirement.

The new process, said the minority, should be the same for everyone.

“We don’t like the idea of having what is essentially a two-tiered system,” says Wardle.

“In our view, it is inevitable that the LPP graduates will be stigmatized by the profession on the basis that these are the candidates who couldn’t find articles and therefore are somehow less qualified,” the minority stated in the report.

“I do think there would be a sense in people’s minds that someone who is in an LPP course in a co-op placement is somehow less than someone who is going to a Bay Street firm, and I think that’s unfair to those students,” he says.

Conway dismisses that perception. “Those people who say that [LPP] individuals will be second-class citizens I think have not really considered the issues fairly and have come to the debate with prejudices and assumptions that are highly questionable,” he says.

But when it comes to hiring, Bryant suspects the large and mid-size firms won’t consider students from the law practice program because they would have a big enough pool of articling students to draw from.

“I just don’t see how the LPP students are going to be able to be competitive in the job market,” he adds.

Along with the concern about stigmatization is the issue of cost. The majority recommends spreading the costs of the law practice program among all licensing candidates.

“We had to consider that [LPP] candidates would be paying for the course instead of being paid by an articling principal and that their co-op placement could very well be unpaid as well,” says Conway. “So from a fairness perspective, the majority came to the conclusion that that cost should be borne by all licensing candidates across the board.”

The majority estimates this would increase the current licensing fee to approximately $5,670 per candidate from $2,950 after factoring in a final assessment.

Conway argues the increased fees won’t be the highest they’ve ever been and adds that the cost of the licensing process used to be considerably higher than it is today.

Still, Wardle says the minority is deeply concerned about the costs for students who take the law practice program route. The minority pointed out in the report that there would be additional fees if students have to relocate for their co-op placement and that many law firms currently pay their students’ articling fees.

“Thus, candidates in the LPP are doubly penalized: once for being ‘second tier’ and a second time financially for their failure to get an articling placement,” the minority said.

Although he’s not in favour of the law practice program, Bryant also doesn’t agree with getting rid of articling altogether. Practical training is “absolutely essential” to becoming a lawyer and articling is a key component of that preparation, he says.

However, the minority said there’s not enough statistical evidence to prove that articling is actually effective.
“The law society doesn’t really regulate articling anymore,” says Wardle. “We don’t have a lot to do with the process; we don’t impose very many checks and balances, and we don’t really know how effective it is or if it’s effective at all.”

In the report, the minority referenced a law society committee that suggested abolishing the articling program 40 years ago. The profession, however, has seemed reluctant to do so.

The task force’s report to Convocation on Dec. 9, 2011, suggested five different options to solve the articling shortage and asked for input from the profession. The task force also held several public consultations across Ontario.

After hearing from the profession, Conway says the majority decided to keep the articling program because it “put more value on the generations of lawyers in practice who have said that the experience of articling and the experience of being a principal to an articling student is very valuable for the training of a lawyer for practice.”

Just as articling has become a barrier to entering the legal profession, the minority said the law practice program threatens to become a different barrier. In its view, “it is difficult to justify [the majority’s] proposal to have not one, but two, lengthy transitional programs, the first of which (articling) cannot be validated, and the second of which (the LPP) creates a new, unfair, and similarly flawed approach.”

The task force will present a motion to Convocation next week asking it to adopt the majority’s recommendations.

The LSUC will air a webcast of the debate on Oct. 25.


For more, see "A reasonable compromise" and "Articling crisis gets worse."