With 14 years of long hours and late nights behind her in the male-dominated commercial litigation field, Jane Southren has her fair share of war stories. 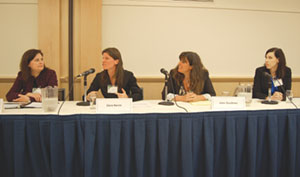 “I’ve had people grab me by the back of the head and try to kiss me and I’ve been equally as physical in my response,” she said.

That’s an extreme example of what she describes as the “dynamic that exists between men and women,” but it’s one she says young women on Bay Street must learn to manage if they’re going to survive there.

Southren was one of four panellists at a discussion on women on Bay Street hosted by the organization Young Women in Law. The event on May 9 at the Ontario Bar Association’s conference centre in Toronto aimed to tackle the unique issues faced by women on Bay Street.

It comes as the Law Society of Upper Canada’s Return to Practice working group issues a report on barriers many women face in coming back to the profession following a leave.

Whether dealing with clients, colleagues or opposing lawyers, Southren said it’s inevitable that sparks will occasionally fly. The key is being able to handle it when they do.

“There’s anything from nefarious, badly behaved hits to a natural chemistry that is going to evolve between interesting, educated, fun people,” Southren said.

“I’d suggest you go in like any other relationship: open-minded and knowing things are going to happen naturally. Sometimes, you’re going to run into people with a nefarious motive and you’re going to have to manage it but don’t be afraid of that.”

Dera Nevin, now the senior director of litigation support at McCarthy Tétrault LLP, said she was able to deflect unwanted advances from clients hoping to blur the sometimes fine line between business meetings and dates with a firm credit card.

“Where a client was trying to pay to turn it into a date or get the upper hand, I could say, ‘No, this is on the firm,’” Nevin said. “It allowed me to reframe the conversation in a way that gave me confidence when I was still a very young lawyer.”

According to Nevin, many young female lawyers find it hard to get that sort of practical advice at large Bay Street firms where formal mentorship schemes tend to dominate. When it comes to issues like work-life balance or whether and when to have children, female lawyers would benefit from more informal structures, according to Nevin.

“Firms do a really good job helping women develop the technical capacity necessary to participate in the meritocracy,” she said. “Where they have a harder time is with social and extracurricular issues. There’s real mentoring that needs to happen, and because of the trust issues, it can’t be formal. It’s got to be informal as well as formal.”

“Institutional fixes don’t work for everybody. They provide a baseline, but above that, you have to think for yourselves about what you need, what you’re lacking. The way I think we get the industry to conform is to communicate, speak out, articulate ideas, and get creative.”

Southren’s firm, Lerners LLP, recently approved her proposal to help targeted associates and partners enhance their business development skills in order to build their own books of business.

Andrea Taylor, director of operations at ATD Legal Services PC, says young female lawyers could be surprised at how receptive firms will be to their ideas.

“They want to hear what you want and what you need to stay because it’s costing them money if you leave,” she said. “They’ve poured a lot of money into your training and it’s not a smart business move for them to lose you.”

According to Andrea Burke, a partner at Davies Ward Phillips & Vineberg LLP, too many women avoid confronting issues after assuming there’s no solution.

“Often, the lawyer will come and say they’re leaving, and it’s the first time the management actually knows there’s an issue,” she said. “But if it had been brought to them before, there could have been a solution worked out.”

For those who take the ultimate step and leave practice altogether, the LSUC’s Return to Practice working group wants women to understand the consequences of the choice to stop practising. “Returning to practice after an extended period is often analogous to initial entry into the profession,” reads the report presented to April’s Convocation.

Providing more information on what it takes to return after an extended break “would help women make informed professional decisions before leaving the practice of law and when returning,” says the report.

Although returning lawyers don’t have to go through articling again or rewrite any exams, they’ll face a practice review if the break was longer than 10 years as well as a host of other common issues.

The working group found that more than half of the men who left practice were back within two years, compared with just 38 per cent of women. About 41 per cent of women never return, versus just 24 per cent of men, and those who do come back face difficulties adapting to new technology and different practice areas without their old legal networks for support.

The working group recommended more educational resources for lawyers planning to depart the profession as well as financial assistance for those who need help to return.

It also wants Convocation to provide funding for career counselling services to women lawyers from sole or small practices who intend to take leaves for maternity, parental or compassionate reasons.

A decision on the report is on hold until the fall when the new batch of benchers has its priority planning session for the upcoming term.