A mortgage without interest may sound like a pea without a pod. But for many of the Muslim faith, it’s the only way to buy a home with a clear conscience. 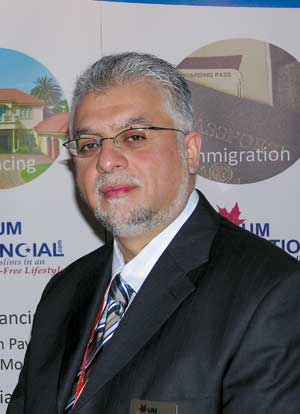 According to Sharia law, business activity must be grounded in moral and ethical principles. Trading in tangible assets or services is permitted, but simply making money from money is considered usury and is forbidden. So lending transactions cannot involve paying or earning explicit interest.

Investments also can’t be in prohibited areas such as gambling, alcohol, pornography, or arms dealing. Transactions cannot be considered high-risk, because gambling or mere speculation is not allowed.
Because Sharia law-compliant mortgages are not widely available in Canada, many Muslims wait until they can plunk down a pile of cold, hard cash before purchasing a house.

“Some people [wait to do that], since there was no other option,” says Omar Kalair, founder and president of UM Financial Inc. (UM is short for United Muslim).
“But, as a general point, all the [Sharia] scholars and imams state that if there is an Islamic alternative, they should avail to that.”

“But if there isn’t, and someone is trying to raise a family, some scholars allow it.”
Kalair bought his first home in 2002 after raising enough capital through interest-free family loans.
Hoping to provide members of his community with the financial support to buy homes, Kalair quantified the market, and approached 70 mainstream financial institutions.

UM Financial eventually began negotiations with the Credit Union Central of Ontario, and it agreed to provide $4 million in financing as part of a pilot project.

“We were able to work with the credit union product development team and our own lawyers in designing a mortgage product that complied with the Bank Act and Credit Union Act, and was also Sharia-compliant, to our own Sharia advisory board for us to sell it within our community,” says Kalair.
In May 2005, UM Financial launched its first mortgage product, based on a successful U.S. model. Demand for the product was high, and the credit union quickly increased financing.

However, due to a concentration limit, the credit union could not lend more than $20 million dollars to any one entity, says lawyer Talal Chehab of Chehab & Khan Barristers and Solicitors, who developed the product for UM Financial.

“After we got to that limit, they found other credit unions within their organization to buy off parcels of mortgages. So from $4 million, we’ve grown to $200 million.”
Originally, UM Financial’s mortgages adhered to a “Murabaha” agreement, in which a financial institution purchases a home for the client and sells it back to him or her at a markup.

But for the last year-and-a-half, it has almost exclusively used a “Musharaka” model, a risk-and-reward sharing partnership arrangement, because it’s easier to facilitate and it’s the model that Sharia scholars recommend.
The standard UM Financial mortgage product is structured as an equity partnership in the home. UM Financial and the homebuyer purchase the home together, while the buyer supplies the down payment. Purchasers pay a proportional rent, which is equivalent to a mortgage fee.

The rent is calculated on a declining basis over time. By making monthly payments, the client buys out the company’s shares of the property.
Clients sign a legally-enforceable Musharaka contract, stating they will have title and that UM Financial will register a mortgage security against the house, but no interest is applied.

UM Financial is also working with one of the Big Five banks in Canada to launch a full-suite of Sharia-compliant financial products, including mortgages.
Currently, UM’s mortgages are 60 basis points more expensive than conventional mortgages, but the hope is that the cost of these mortgage products will eventually fall in line with conventional mortgages once the financing available matches existing demand.

UM financial has provided financing for roughly 500 mortgage transactions so far.
“We have a list of about 5,000 families that either want to re-finance existing conventional mortgages into Sharia-compliant [mortgages] or are in the process of buying a home and want to get a commitment for financing,” says Chehab.

Another organization, the Islamic Co-operative Housing Corporation Ltd., has offered Islamic-compliant housing for 26 years based on a similar decreasing Musharaka partnership.

In this agreement, the members and the co-op purchase the house and members pay a proportional rent to the co-op. Members are required to increase their shares and ownership of the house over a period of time. They sign an occupancy agreement, and are not tied into a long-term contract.

And as they accumulate more shares, the rent decreases. When the unit holder purchases all of the required shares, they surrender the shares to the co-operative, and title is transferred from the co-op to the unit holder.
But first, the house is evaluated and any appreciation or loss in the value of the house is shared between the co-op and the member, says president Pervez Nasim.

“That’s the partnership concept,” he says. “You share the risk. You share the profit and loss.”
Over the years, the co-operative has purchased almost 600 homes in Canada and has transferred title of almost 200 homes to unit holders.