Portable courtroom on tap for Barrie

A temporary courtroom under construction at the Barrie, Ont., courthouse is “bound to be an eyesore,” but when it comes to court facilities, esthetics come second to need, according to some members of the bar in that city. 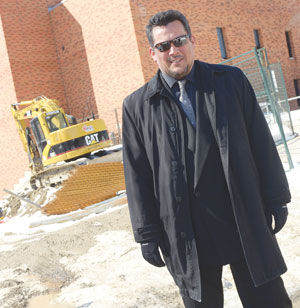 The Ministry of the Attorney General says it’s building a courtroom and judicial chambers made of “steel components and precast panels” to alleviate the severe lack of space that has plagued the city’s Superior Court for several years.

“We’ve encountered issues where cases would be scheduled for trial in Barrie and there would be times when the lawyers are ready, the judge is ready, but there wasn’t a room or a suitable room for the trial to happen,” says Ted Chadderton, president of the Simcoe County Law Association. Out of about 13 courtrooms in Barrie, only four can accommodate juries, according to Chadderton.

In the past, he has had to drive to nearby cities for a trial despite having scheduled it in Barrie.

“It’s hard to explain to a Barrie client that we have a trial date and a judge but we’re all going to have to drive to Bracebridge an hour away to do it,” says Chadderton.

Built in the late 1970s, when less than 40,000 people lived in Barrie, the burgeoning population has simply outstripped the capacity of the courthouse, says personal injury lawyer Roger Oatley of Oatley Vigmond Personal Injury Lawyers LLP.

“There is no question if you ask any lawyer who does litigation in this area that we are under-resourced both with respect to courtrooms and with respect to judges,” he says.

“The court has attempted to make do by squeezing courtrooms within the existing structure out of areas of the courthouse that were intended for other purposes. But it really is maxed out.”

The new structure will include a criminal jury courtroom and judges’ chambers, according to the Ministry of the Attorney General.

“This is a cost-effective solution that can be delivered in a timely manner to address immediate pressures and fit on the existing site,” said ministry spokesman Brendan Crawley.

Although there’s a great need for the temporary courtroom, it will be unsightly and can’t be a permanent solution, according to Oatley.

“Whatever is done to relieve the situation will be welcomed, although my experience — and I suspect no one will disagree with it — is that these short-term, temporary solutions have a way of becoming long-term solutions and I would be very surprised if that temporary courtroom doesn’t sit there in 10 years time,” he says.

“It is bound to be an eyesore and it will destroy any attractiveness about the existing courthouse, and I think the concern we all have to have is whenever the court system is forced to make the best of substandard accommodation, it reduces the court system in the eyes of the public.”

The ministry says the new courtroom is a response to the growing number of complex criminal cases in Barrie.
“The addition is necessary due to the increase in the number of criminal jury and multi-accused cases, and the length and complexity of cases at the Barrie courthouse,” said Crawley.

“The Barrie courthouse is one of the busiest court locations in the province, as it services court activities for Barrie, as well as providing space for judges and staff who serve in the four satellite courts for Simcoe County — Bradford, Collingwood, Midland, and Orillia,” he added.

Crawley also noted the ministry “is currently reviewing long-term plans for the Barrie courthouse as part of our annual infrastructure planning process.”

Barrie lawyer Mark Kelly says the increase in complex criminal matters means civil cases end up on the back burner.

“Civil trials are not getting reached as quickly as they possibly could be,” he says. The new court, “if it alleviates the wait times, is certainly is helpful,” he adds.

Previously in Barrie, lawyers worked out of the old courthouse located in what’s now the courtyard with the current building erected around it.

“All the windows were boarded up and it was really quite a dreadful situation,” says Oatley.

“The irony is that the former courthouse that predated what we have now was in the centre courtyard of the present courthouse, exactly where they’re planning to put the portable. So it really is like coming full circle here.”