New OBA head opens up about struggle with depression

The incoming president of the Ontario Bar Association is going to do something against the advice of some of his closest friends: He’s going to open up about his struggle with mental illness. 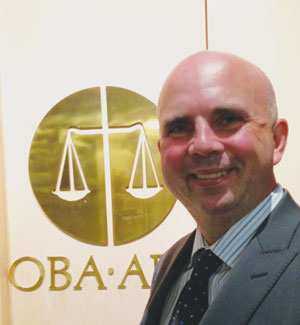 “Close friends I’ve talked to have said, ‘You mention this and they will think differently of you,’” says Orlando Da Silva, who will head the OBA starting this month. “And I thought, ‘Well, OK. But can some good come out of that?’”

Da Silva, a civil Crown counsel with the Ministry of the Attorney General, had kept his depressive disorder a secret, even from his family, until very recently. He has suffered from the disease, sometimes requiring hospitalization, since he was nine years old. He endured the recurring bouts of depression quietly, he says, for fear of appearing weak as a lawyer.

“I struggle a great deal with depression and never once turned to typical things that you’d expect a lawyer to turn to — Homewood [Human Solutions] — or I never called a colleague,” says Da Silva, who worked in private practice before joining the ministry’s Crown law office.

“You know, I never wanted to show weakness. Especially as a litigator, I thought my reputation would be ruined. All litigators want to be seen as strong, even uncompromising in some cases.”

Da Silva worries lawyers who suffer from mental illness don’t use the resources that are available to them because of the stigma surrounding psychological problems. He says fighting against that stigma will be his “unique contribution” as president of the OBA.

A son of Portuguese immigrants from Kitchener, Ont., Da Silva says he didn’t meet a lawyer until he went to law school. His father was a wielder and his mother a homemaker. His story, he says, isn’t about depression but the success he has enjoyed in spite of it and the support he has received regardless of the stigma.

Very recently, he told some colleagues at the OBA about his condition and was happy with the support he received. Coincidentally, the next Canadian Bar Association president, Calgary lawyer Michele Hollins, has similar goals as Da Silva. She says personal wellness will be top on her agenda as she begins her role this month.

Hollins, a single mother of twins, has previously opened up about her own experience with depression, something she says came after her daughters left for college.

“I am not a person you would upon meeting know that I could ever have suffered from depression. I am an unbelievably happy person,” she says.

“It took me quite a while to figure out what was going on. Mine was situational. It didn’t last, which I’m grateful for, but I think that talking about our own experiences does a couple of things. It allows people to identify a problem that they haven’t identified . . . and the other is allowing people to share their own experiences more openly, without the judgment.”

Hollins says she’s aware of Da Silva’s interest in raising awareness about mental health and she’s willing to work with him.

Prior to joining the OBA’s leadership ranks as a vice president, Da Silva worked with the organization’s civil litigation section. That’s where Superior Court Justice Ria Tzimas met him. They both had an infant born the year they met, says Tzimas, and they bonded over conversations about their kids’ development.

Later, Da Silva worked two offices down the hall from her at the Crown law office, she says. “I have nothing but admiration for Orlando,” she says. “He’s very principled, very hard-working, has a heart the size of a room. He’s very, very caring.”

He’s passionate about the law and his colleagues, says Tzimas, who notes she was among “the small minority of people” who were aware of his mental-health struggles. He’s “exceptionally courageous” for reaching out to others experiencing mental illness, she says. “It speaks again to his strength of personality.”

The stigma around mental illness comes partly from not knowing how to cope with it, she adds, noting it’s rare to find leaders who bring visibility to an invisible disease.

“I think Orlando will go down as a trailblazer on this issue. He’s widely respected in the profession, and I think the cache of being the president of the OBA can do nothing but, I think, help shine that light on those issues and get the dialogue going.”

Lucy McSweeney, children’s lawyer for Ontario, was Da Silva’s former boss at the Crown law office. She describes him as an “earnest and honest” friend who always remained cool under pressure and never “tooted his own horn.”

His decision to reach out to lawyers with mental illness by putting his own story out there is “enormously brave and enormously important,” she adds.

It isn’t easy to manage wellness and serve people in intensive work environments, she notes. “There’s many hours in the day, but also we’re holding in our hands a lot of people’s rights and hopes. And that’s really stressful. You can’t always make it better. The strain of it is hard to integrate into a full life, so if [Da Silva] wants to talk about that, the challenges in that regard, wow, there’s a leader.”

In her view, Da Silva’s decision to take up the cause makes him a stronger person. “A leader is not a perfect person. It’s about being three dimensional,” she says.

For his part, Da Silva hopes lawyers going through those issues will give him a call. Within the OBA, he says he’ll look into what the profession can do about mental illness.

While metal illness will be a priority for both the OBA and the CBA presidents, Hollins says she has another personal goal of focusing on women in the legal profession. She says the retention of women in law and promoting leadership by women will also be on her agenda.

Da Silva’s ascension to the OBA role follows fellow ministry employee Janet Minor’s election as treasurer of the Law Society of Upper Canada this summer. Another one of his goals as president of the OBA is to bring more Crown lawyers to the organization.

“Government lawyers do good work . . . but they’re not as engaged with the OBA,” he says.