A Law Society of Upper Canada committee has recommended ending the Law Practice Program after it finishes its pilot. 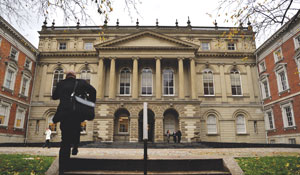 The committee’s report on the LPP said that while the program had many positive reviews, it failed to provide an alternative to articling “that has gained acceptance by candidates and the profession and that is sustainable in the long term.”

“We have to have a process for licensing candidates that is fair and defensible,” Peter Wardle, the chairman of the Professional Development and Competence Committee, told Law Times.

“And so we have a group of candidates who are going through one pathway who are telling us that they don’t think the process is fair and defensible and that’s obviously something we have to be concerned about.”

Despite the fact that the report notes the LPP may in fact excel over articling in a number of areas, it says the program would not be viable past its pilot because of a perception that the LPP has created a two-tiered system.

The report acknowledged that there is no evidence “to suggest that the LPP is in fact second-tier” but that the perception itself among candidates was enough to mean the program would not be sustainable.

This perception sprouted opposition to the program when it was first proposed and approved in 2012, along with concerns it would be costly and that its placements would not necessarily be paid.

Gavin MacKenzie, a former bencher who voted against approving the program in 2012, says his reservations at the time were centred on the idea that the program created two tiers in the licensing system.

“A major objection that I and others had to the proposal that carried . . . was that it created a two-tiered system and that graduates of the Law Practice Program would not be perceived in the same light as students who secured articling jobs,” says MacKenzie.

MacKenzie says he would have preferred to see a system in which the law society had more articling positions available.

“We’ve seen over time that firms in certain practice areas and in certain parts of the province that formerly hired articling students have stopped doing that for a variety of reasons,” he says.

Proponents of the LPP have said it provides a skills-based program that is just as good if not better than the experience articling provides and that it offers opportunities that otherwise would not exist.

The program entails four months of course work followed by a four-month placement.

The report — which was based on information gathered from surveys and focus groups with candidates and employers — says that LPP candidates have been more diverse than their counterparts in articling.

In the program’s first year, surveys showed that 33 per cent of LPP candidates identified as racialized, compared to 21 per cent of articling students that year.

The report also found that larger percentages of LPP students were internationally educated, francophone and older than 40.

The LPP was first proposed as a five-year program and later shortened to three over concerns the program would become “entrenched” before it was reviewed.

But the shorter pilot has meant that there is not sufficient information to compile statistics concerning employers’ views of the program.

The committee, however, still felt it had enough information about the program and how it is perceived to make its recommendations, which will be voted on at Convocation’s November meeting.

“The majority of the committee is satisfied that we have enough information now, and we’re not convinced that leaving it to run two more years will really make any meaningful difference,” Wardle says.

Wardle stresses that the committee’s report left the door open to the development of other experimental programs and that this by no means recommends ending the conversation on reforming the licensing process.

“There continue to be concerns about articling and we’re going to continue to examine those. It’s not as if this is an end to the process,” he says.

The report recommends that the law society should explore introducing a “three-month abridgement of articling” for candidates who participate in skills training in a law society program.

The report also recommends creating what it called a Practice and Procedure Examination, which will replace the bar exam and will be given to candidates before they receive training such as articling.

The committee is also recommending a practice skills examination be added to licensing requirements.

This would take place after the experiential training was conducted. If approved, both tests would be implemented for 2018-19.

These two tests were proposed to Convocation in April, but the governing body decided to consider them at the same time as the LPP review.

The report praised the expertise of the LPP providers — Ryerson University and the University of Ottawa — for having “breathed life into the programs and, remarkably, done so in a very short time,” and recommended that the resources of each provider be used in future programs.

The report noted that both programs expanded the networks for work placements and created “rigorous programs that provide systematic and consistent exposure to all the required competencies.”

When the LPP was initially approved, the program was expected to attract around 400 candidates in each year.

The lack of interest has made the program not financially sustainable, Wardle says.

If Convocation votes to approve the recommendations, Wardle says there are many lessons that can be learned from the LPP for future licensing programs.

“I think it was an experiment,” he says. “We learned a lot from it. We’re going to take that on to the next step. We’re not going to leave the licensing process alone.
We’re going to try to improve it.”