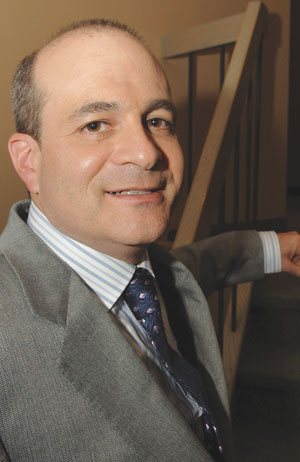 According to the co-founder and chief executive officer of electronic document exchange company CourtSide EDX, the legal profession has languished while the world advances into the electronic age as it continues to rely on mail, couriers, and the otherwise virtually obsolete fax machine when it comes to service of court documents.

“I think the time has come for these antiquated systems of delivery to be put out of use in the litigation environment like they have been in other environments,” says Tweyman, who also practises family law at Tweyman Law in Toronto.

“We noticed service has become a bit of a blockage in the system because it takes far too long, can become a source of dispute, and can also be very expensive.”

Tweyman and co-founder Arin Klug, also a practising lawyer, seized on another relic of a bygone era, s. 16.05 (1)(c) of Ontario’s Rules of Civil Procedure, to get their company up and running. That section allows for service on the lawyer of record for a party by depositing a physical copy “at a document exchange of which the lawyer is a member.”

Tweyman says he’s never heard of anyone making use of such an exchange to effect service but used the concept to successfully lobby the civil rules committee for a new rule that would validate service by an “electronic document exchange.”

From Jan. 1, when the amended rule takes effect, members of CourtSide EDX or any other electronic document exchange can upload and serve documents on any other member of the same exchange. A record of service generated by the exchange serves as proof of service under the new rules, thereby dispensing with the need for an affidavit of service.

“The change we proposed is an incremental one but it’s going to have a big effect on the rules,” says Tweyman.
“Lawyers and law clerks who are doing service on a regular basis are going to love it. Normally, it can be quite a tedious process but here it can all be done in a matter of minutes.”

Tweyman says the exchange’s independence from the parties will also help eliminate common service disputes. CourtSide EDX will verify delivery and can identify when a recipient has opened a document. In addition, the record of service, which provides a link to the contents of the original upload, can settle arguments over exactly what was served.

A similar service is already in operation among the family law bar in Ontario in light of the boost provided by Ontario Superior Court Justice Craig Perkins’ Nov. 19, 2013, decision in Fehervari v. Kiss. In that case, the judge validated the service of electronic documents uploaded to the Support Information Exchange web site under the Family Law Rules.

Support Information Exchange founder Michael Marra, a family lawyer based in Elora, Ont., says his service started out as an evidentiary-record management aid in an area of the law that can be particularly document heavy. Even simple child support cases, Marra notes, require a huge amount of financial disclosure with parties continuing to exchange information long after settlement.

“The service part is one aspect of what it’s used for, but it’s not the sole purpose,” he says. “Our whole emphasis is access to justice so we can make the process cheaper and easier for everyone. Everyone can access the documents without having to constantly spend money on copying and couriering back and forth.”

“We run a paperless practice, so from a green perspective, this will eliminate the need for a lot of paper as well as the carbon footprint that comes from using couriers or process servers. From an admin perspective, it’s also going to save a lot of time and make things much more efficient,” he says.

Feldstein says service by electronic document exchange is preferable even to service by e-mail because of the security features built into the Support Information Exchange as well as the larger limit on the size of documents lawyers can upload to the service.

“Ideally, I think the government should adopt something like this for filing, too. It’s hard to believe that in 2014, you still have to turn up at the courthouse to file material in order to get in front of a judge,” Feldstein adds.

But he may be waiting some time for that kind of advancement. Just this month, the provincial government confessed to a $4.5-million writeoff when it decided to scrap its five-year-old Court Information Management System project last year. The abandoned project had included plans for online filing, but the province has instead begun a smaller-scale electronic-filing pilot project in Toronto-area Small Claims Court locations.

Pulat Yunusov, a Toronto litigation lawyer who has also founded his own court form generator, Backsheet Inc., says he’s happy to see the civil rules committee embracing technology even if only in an incremental fashion. He expects CourtSide EDX to face some competition once the rules come into force because they “set a relatively low barrier to entry.”

“It’s definitely a step in the right direction. As a tech person, I think we should focus on delegating as many things as possible to machines and software so that lawyers can focus on the things that only they can do: things like making legal judgments and strategic decisions, interviewing witnesses, and preparing arguments,” says Yunusov.

“Even if it doesn’t make a huge impact right now, it changes the litigation culture because it educates litigators, parties, and judges and makes them more acquainted with technology.”

Marra says he would also like to see more radical action on electronic filing but notes it shouldn’t put lawyers off from taking action themselves.

“It’s pretty clear you can’t wait for government to lead the change given all the pressure and demands they are under. I think if you have a vision for changes, my view is just go for it and put it out there,” he says.

For more, see "AG falters on court technology system once again" and "Lawyers filling the void."