Veteran Toronto defence lawyer Deryk Gravesande has been found guilty of smuggling 58 grams of marijuana to a prisoner he was visiting in the Toronto (Don) Jail, a verdict that has criminal lawyers raising concerns about custodial searches. 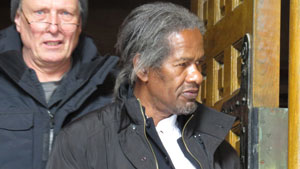 Ontario Court Justice Wayne Rabley said he wrestled with the case, looking for a way to conclude the Crown had not proved that Gravesande, 61, handed his former client eight cellophane-wrapped marijuana parcels and some rolled marijuana cigarettes.

But he said finding Gravesande guilty of one count of drug trafficking was not difficult, based on the evidence, which was circumstantial.

The small courtroom on the third floor of Old City Hall courthouse was packed with Gravesande’s supporters for the verdict Feb. 13, several of them prominent criminal defence lawyers.

His lawyer, Frank Addario, said he is disappointed with the judgment but it is premature to comment about a possible appeal. Gravesande remains on bail and returns for sentencing May 14. He made no comment.

Federal prosecutor Roderick Sonley told the judge he will seek a custodial sentence. The maximum is five years.

Anthony Moustacalis, president of the Criminal Lawyers’ Association, said outside court he too is disappointed by the verdict. Jails are rife with drugs, he said, and if correctional officers don’t follow procedures for searching prisoners it leaves lawyers vulnerable to unfounded accusations.

Gravesande visited his former client, Joacquin Rowe, on the evening of Jan. 20, 2012.

Two correctional officers testified the defence lawyer smelled strongly of cologne and marijuana as he approached the second-floor visiting room to meet Rowe.

Officer Darryl Beaulieu said after smelling the odour he called his supervisor for instructions. The supervisor told him to follow standing orders, which require a prisoner be strip searched before and after professional visits.

Written strip search rules stipulate the prisoner undress completely and bend over, and the procedure is witnessed by a second employee, and then recorded in a logbook. Beaulieu testified he asked Rowe to strip down only to his boxers and noticed no drugs. Another officer was present for only part of the search and it was not noted in the logbook.

“It is difficult not to be a little critical of the failure of a correctional officer to follow procedures where it is clear that there would be significant consequences to a criminal defence lawyer if it is that the correctional officer’s suspicions were borne out,” Rabley said.

But a video showing Beaulieu talking to correctional officer Nicu Sava and gesturing to his own nose, as if indicating an odour, corroborates his account, the judge said.

Rowe and Gravesande met for 25 minutes in room 202.

Sava testified he too smelled a strong marijuana odour. He said the visiting rooms are always searched before and after they are occupied. He maintained others had done those searches in room 202 that day because the logbook and security video showed he had not.

After the visit, Beaulieu conducted a second similar search of the prisoner. He said he immediately noticed a black sock containing the marijuana, plus a parcel of lidocaine (an anesthetic) tied to the waistband of his boxers.

Rowe was not called by either Crown or defence.

Gravesande testified he would never bring drugs to the Toronto Jail and every seasoned lawyer knew inmates were strip searched before and after visits with counsel.

“Why, the question must be asked, would a lawyer who is in good standing be so foolish as to take the chance to bring drugs into a jail and give them to a former client?” the judge said. “One might similarly ask why would the mayor of Toronto smoke crack cocaine. . . . It really isn’t my position to speculate.”

The judge said he can’t point to any part of Gravesande’s evidence that is implausible or unbelievable.

“That does not mean I found his evidence compelling enough to say I believed him.”

The CLA president said criminal lawyers will be reluctant to visit their clients in jails when procedures aren’t followed. Moustacalis said the guards could have questioned and searched Gravesande if they suspected him of carrying drugs.

John Struthers, a CLA provincial director, said many lawyers are advised to take witnesses to jail visits or speak to clients in an impersonal way behind glass because “these accusations are almost ridiculously easy to make and very hard to defend.”

The Don Jail is no longer operational, but the new Toronto South Detention Centre offers as one solution the videotaping of cells where lawyers speak to their clients, but this raises solicitor-client issues, Struthers said.

In 2010, Toronto lawyer Raymond Wai-Ming Li was disbarred by the Law Society of Upper Canada following his conviction in 2004 for smuggling heroin, hash, and marijuana to an inmate in the Toronto Jail. He was sentenced to four years in prison.

A law society spokesperson said the society, in general, monitors lawyers’ situations when they are charged with an offence and will likely also investigate Gravesande’s situation.