The Law Society of Upper Canada has suspended a lawyer while investigating whether his conduct in litigation has hampered the administration of justice. 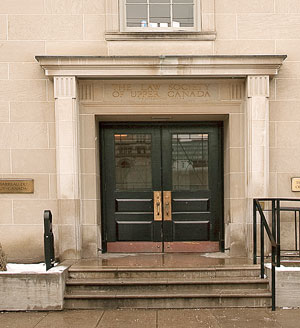 The provincial regulator currently has six open investigations into Glenn Bogue for a list of allegedly vexatious proceedings he has started against judges, the Queen and even the prime minister personally.

His submissions have often denied the authority of the federal and provincial governments, according to the decision, and have met mounting criticism in the courts.

“Based only on the Law Society’s submissions, we accept there is a significant risk of harm to the public and to the public interest in the administration of justice and that an order suspending Mr. Bogue on an interim interlocutory basis would reduce that risk,” said the decision in Law Society of Upper Canada v. Bogue, at the Law Society Tribunal hearing division.

“There is evidence, including comments from multiple judges, to suggest that Mr. Bogue is using litigation techniques that could harm the administration of justice and cause costs and delay to his clients and others.”

In Steinkey v. Canada, 2017, Federal Court prothonotary Roger Lafrenière wrote that he was “very troubled” to see Bogue had accepted a retainer to help a client implement a vexatious proceeding. In February, Ontario Superior Court Justice Timothy Ray quashed an appeal Bogue filed on behalf of a client in Chalupnicek v. The Children’s Aid Society of Ottawa, determining that the motion was “entirely unnecessary.”

The appeal concerned a decision by a master to dismiss an action Bogue brought on behalf of a client, as it “appeared to be frivolous, vexatious or an abuse of process.”

In his submissions arguing against the dismissal, Bogue referred to “non-existent or self created tribunals” such as the “International Tribunal Against Church and State” and the “International Common Law Court of Justice,” which allegedly indicted and convicted the Pope, the Queen and former prime minister Stephen Harper of murder and conspiracy to murder.

The submissions also used terms that the master said were examples of what the courts have identified as “a strategy of pleading ‘specific and irrelevant formalities and language’ portrayed as having legal significance.”

“This is a hallmark of much frivolous litigation in Canada designed to ‘disrupt court operations’ and to frustrate the legal rights of litigants,” MacLeod said.

Bogue’s appeal of the master’s decision was ultimately unsuccessful as he filed it in the Superior Court, but the Divisional Court would have been the appropriate court to which to appeal.

“I am mindful that several judges have concluded that the merits of the Plaintiffs’ claim are devoid of merit,” Ray said in the decision quashing the appeal. “That question, however, is not before me, except to remind me that the appeal route they chose in their Notice of Appeal was equally devoid of merit.”

The Ontario Court of Appeal found that Bogue had made unfounded claims of bias against judges and repeated requests for adjournments causing delays.

In Miracle v. Miracle III, Bogue requested that two of the three-judge panel that was set to hear an appeal recuse themselves because of bias.

They rejected the request, saying that Bogue had made similar allegations of a differently constituted panel, which found no substance to the allegations, but adjourned the matter.

The law society has been investigating Bogue since March 2016, when it first started receiving complaints about the lawyer. The law society brought an interlocutory suspension motion for Bogue, arguing his ongoing submissions in courts were putting the public and the administration of justice at

“On the evidence now before us, the risks are significant and would continue during the period of the adjournment,” said the decision, issued on behalf of a three-member panel.

“Nothing short of a suspension could adequately address them, given the evidence we have seen. Mr. Bogue acknowledges he is actively representing clients on litigation files, and there is no indication he has stopped the types of approaches alleged here.”

A spokeswoman for the LSUC says the law society seeks interlocutory suspensions to address serious risk that becomes apparent before an investigation is complete and before evidence is available to prosecute.

Bogue was granted an adjournment of the interlocutory suspension motion while he seeks counsel.

He will still be suspended as a term of the adjournment, but he could still get the interim suspension lifted when the motion is heard.