Islamic finance experts from around the world converged at a two-day conference in Toronto last week to share their expertise and form alliances with players in North America’s burgeoning Islamic finance sector. 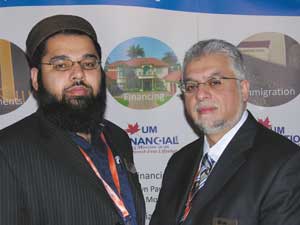 And although Islamic finance is still in its infancy in Canada, many key players believe its time has come.
The Islamic finance sector has exploded in the Middle East, Southeast Asia, Europe, and the United Kingdom over the past 30 years and has grown by 15 per cent each year for the past five years alone.

There are now roughly 300 Islamic financial institutions in 75 countries holding assets of more than US$300 billion and US$400 billion in financial investments.

Islamic banks have started opening in some Western cities, including London, England, which plans to compete with Dubai and Malaysia to become the world centre of Islamic finance.

Many of the globe’s largest conventional financial institutions are also moving aggressively to provide Islamic-law-compliant financial products to cater to the large and increasingly affluent Muslim population. Muslims account for almost one quarter of the world’s population and Islam is widely considered to be the world’s fastest growing religion.

According to Islamic law, business activity must be grounded in moral and ethical principles. Trading in tangible assets or services is permitted, but simply making money from money is considered usury and is forbidden. Therefore, Shariah-compliant financial products and services of all types cannot involve interest or explicit interest.

Investments also can’t be in prohibited areas such as gambling, alcohol, pornography or arms dealing, and transactions cannot be considered high-risk, because gambling or mere speculation is not allowed.

Despite the growth of the Islamic finance sector around the world, it is still taking baby steps in North America. But experts say the largely untapped market in Canada includes close to a million Canadian Muslims, as well as non-Muslims interested in ethical investments, and oil-rich foreign investors from the Middle East.

But that is about to change, says Omar Kalair, the founder and president of UM Financial Inc. His organization - which started off offering a Shariah-based mortgage product and later diversified into other areas - has now teamed up with one of the big five banks. In the coming months, this bank will begin distributing a full suite of UM Financial’s usury free products, including mortgages, investments, credit cards, deposits, and international financing.

And there will be more to come, predicts Walied Soliman, a lawyer at Ogilvy Renault LLP in Toronto who has been working in this area for two-and-a-half years.

“I definitely think that products that are Islamic-finance compliant will be offered by more than one [large] financial institution in this country,” he says. “I also believe that after the success of one or more of those banks, major international players will be interested in pursuing opportunities in Canada. I’m quite convinced of that.

“Most financial service providers that target the retail market in Canada are, at the very least, taking a very close and hard look at this area,” he says. “The market is too big not to have someone tap it.”
Stuart Carruthers, a partner at Stikeman Elliott LLP in Toronto, says he and others at the firm are also taking this trend very seriously. The factors leading to the explosion of Islamic finance in London are also present in Canada to a lesser degree, he notes.

Canada has a large, growing, and demographically young Muslim population concentrated in large Canadian cities with close ties to family members and to institutions in predominantly Islamic countries, he notes. And large Canadian financial institutions make an effort to reach out to multicultural communities in Toronto and other big cities.

“We always look to see what’s coming down the pipeline. And we’re expecting to see more of this activity in Canada,” says Carruthers.

However, the Royal Bank of Canada ventured into this market by testing a Shariah-compliant financing product several years ago, but decided there was insufficient demand for the product.
It wasn’t a lack of demand that sunk that product, says Faisal Kutty, a partner at Kutty Syed & Mohamed in Toronto, legal counsel to UM Financial who also advises other Islamic financial companies in Canada.

Once banks start offering competitive products that are backed by community organizations, and evaluated and approved by Islamic scholar advisory boards, they’ll get buy-in from the Muslim community, he says. And oil-rich investors from the Middle East will also start paying attention.
“A big chunk of the money that goes into Islamic finance comes from the Middle East. And a lot of them are afraid to invest in the United States because of all the post-[Sept. 11] paranoia. . . . Canada is considered pretty safe.
“Some of the big players in the Middle East might come here and purchase large commercial ventures and [do] real estate transactions and they would like to structure them through Islamic financial institutions.”
There’s another reason why banks and smaller Islamic financial institutions need each other, at least when it comes to offering Shariah-compliant mortgages.

Islamic mortgages are often structured as rent-to-own agreements, explains Kalair. In order to circumvent interest, when someone purchases a home, UM Financial becomes an equity owner in the home. So, technically, the client is living in a home that is partially owned by UM Financial.

Instead of paying interest, the client pays rent and a principal payment each month. In the end, total monthly payments amount to roughly the same as under a conventional mortgage. However, stating they have equity ownership in a home is too risky for banks, so there are two separate agreements: one between UM Financial and the purchaser, and the other between UM Financial and the mainstream financial organization.

However, Kutty says banks should also understand that Muslims who enter into Islamic finance models are extremely cautious about taking on loans or debt, and are unlikely to default on payments.
His office has dealt with

hundreds, perhaps thousands, of transactions over the past 11 years, and only one client has ever defaulted on a mortgage. In that situation, the client was going through a divorce and the couple couldn’t decide who should continue making payments.
“These things are taken very seriously,” he says. “They won’t generally buy a house and do a ‘screw you’ type of thing.”

Lawyers who practise in this area don’t have to be experts in Islamic law, says Soliman. The lawyers who succeed in this area will be excellent corporate or banking lawyers with proven track records for thinking outside the box - so they can take the faith-based criteria given to them and create products that work within the Canadian regulatory landscape.

For instance, real estate transactions typically require structuring a loan as a business transaction where the lender doesn’t charge explicit interest but still receives some sort of return.