Can colonel get a fair trial?

OTTAWA - Police leaks and an avalanche of national media coverage of the arrest of Canadian Forces Col. Russell Williams on murder charges could rule out a fair jury trial, criminal defence lawyers worry. 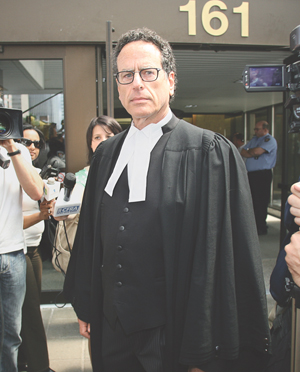 Publication of apparent details of a lengthy interview and statement the former commander of Canada’s largest air force base allegedly gave police before they laid the charges could make prosecution, even through a trial by judge alone, more difficult, says Mark Ertel, past president of the Defence Counsel Association of Ottawa.

“I believe that the public regularly convicts people, but this one is really over the top,” he notes. “The journalists have all convicted him, and everyone I know has convicted him. I think it’s going to be impossible for the guy to get a fair trial with a jury anywhere because the publicity has been so widespread.”

To top it off, the lawyer Williams retained following his arrest, high-profile Ottawa advocate Michael Edelson, has the kind of expertise and courtroom ferocity that could expose even the smallest slip the police may have made in the case, say some of Edelson’s colleagues in the capital’s criminal bar.

The fact that Williams has hired Edelson suggests the accused air force officer may have more than a guilty plea in mind despite the difficulty of bargaining pleas on two separate murder charges.

“If the police have crossed the boundary, Mike will find it,” says Richard Addelman, the criminal defence lawyer whose Ottawa firm Edelson first worked with more than three decades ago.

The spectacular case, involving a 46-year-old officer who was so dedicated and had a career so brilliant fellow officers say he was being groomed for a promotion to lead the entire air force, has had so much publicity that its details could almost go without mention.

The Ontario Provincial Police charged Williams last month with the murder of two women who lived near the Canadian Forces base he commanded near Trenton, Ont. One of the women, 37-year-old  Cpl. Marie-France Comeau, was attached to the base when she was killed. The other woman, 27-year-old Jessica Lloyd, lived in a nearby town and disappeared on Jan. 29.

The OPP also charged Williams with two sexual assaults that occurred in nearby Tweed, Ont., last fall. Lloyd and the two women who were sexually assaulted lived on the same street in the town, Cozy Cove Lane, where Williams and his wife, a prominent health

foundation executive who lived primarily in Ottawa, also had a residence. The OPP have said they are looking at unsolved murder cases in other regions where Williams has been posted, and that investigation
continues.

The details of police events that led to the charges against Williams erupted on newspaper front pages, television broadcasts, Internet news pages, and Twitter soon after his arrest, but a Globe and Mail column by Christie Blatchford contained extraordinary accounts of what went on behind the scenes.

She quoted “sources” to say Williams had given police a “lengthy and wide-ranging statement” about the murders and that he allegedly led police to Lloyd’s body and disclosed details about the sexual assaults and other forced entries that Blatchford termed “lingerie break-ins.”

The column named one detective as the “key officer” in the interview room and, this time attributing the information to “those close to the investigation,” went on to describe the manner in which Williams allegedly gave his statement.

Edelson won’t comment on the case but, in an interview with Law Times, describes the passion for criminal law that has led him to become one of Ottawa’s best-known lawyers on whom some of the most high-profile characters in the city have depended.

“What I can tell you is most days there are few things that I would find more interesting. It’s because of the human drama element: people at their best, people at their worst,” says Edelson, who along with another law student began his career in criminal law by founding a legal aid program at the University of Ottawa in the 1970s.

The list of Edelson’s high-profile clients is long. It includes Ottawa Mayor Larry O’Brien, acquitted last year of influence-peddling charges stemming from his mayoral election; Margaret Trudeau, whom Edelson represented when a trial judge and later an Ontario Court of Appeal judge tossed out impaired driving charges she faced; Michael Cowpland, the former high-flying head of the Corel Corp. software firm who once faced insider-trading charges; and Maher Arar, whom Edelson represented when the RCMP first sought to interview him on what a commission of inquiry later ruled was unfounded suspicion of terrorism activity.

Edelson has also represented a string of Ottawa police officers and at least one RCMP officer through the years who were charged with assault, sexual assault, and criminal driving offences that, in at least two cases, led to serious injury or death. The most notorious ended in the acquittal of an undercover drug officer who killed a 16-year-old cyclist when the officer drove into him on his way home from a bar in 1994.

The judge who heard the case accepted the officer’s explanation that he left the scene of the collision because he thought he had hit a deer. Crown prosecutors had earlier withdrawn impaired driving charges against the officer because police who conducted the initial investigation didn’t follow the required procedure for taking blood samples. Another case against an off-duty RCMP officer also involved legal errors by police.

“There’s a reason why the police officers hire him. Obviously, they know who is most effective and who they are best off going to in the event they get into trouble,” says David Paciocco, a prominent University of Ottawa law professor who helps Edelson plan trial strategy and performs other work, including appeals, as general counsel at Edelson’s firm.

Edelson once told a newspaper reporter: “I don’t go in there to baby witnesses. That is a war room, you are literally going to battle on behalf of your clients.”
One of Edelson’s weapons behind the scenes, and sometimes in the courtroom, is Paciocco, whose expertise on evidence has been cited at the Supreme Court of Canada.

“He is meticulously prepared,” Paciocco says of Edelson. “And he’s smarter than most, if not all, of the people he has to oppose. That combination of intelligence and meticulous preparation was imposing enough when he started out. Now you couple that with almost three decades of experience and you get the package that you currently have. He’s a very, very effective trial lawyer.”

Addelman also describes Edelson as a meticulous planner with an instinct for finding jugular veins in the courtroom.
“He knows exactly where he’s going with every witness,” says Addelman. “If he finds a weakness, he’s not sure when to stop.”