Patricia Hughes would like legal service providers looking for speedy ways to implement technology to slow down and consider those who might be left behind by such advances. 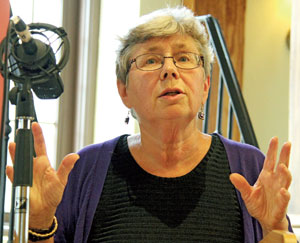 The founding executive director of the Law Commission of Ontario is working to develop a set of guidelines to make sure the “digital divide” is considered in the adoption of new technology in the legal industry.

“If you’ve assumed that these technological mechanisms are allowing those people to access whatever they need, these people are going to be left behind even more,” she told Law Times.

“Perpetuating the digital divide is a problem.”

For Hughes, innovation must be balanced with inclusion, as legal service providers may actually be opening new gaps for those who are not computer literate when they rush to implement systems.

She presented a draft set of the guidelines at an event discussing technology at Access to Justice Week — an initiative set up by The Action Group on Access to Justice, which is supported by the Law Foundation of Ontario and the Law Society of Upper Canada. Hughes, who formerly represented the Law Commission of Ontario on the TAG initiative, was the executive director of the commission’s executive director from 2007 until she retired in 2015.

The event tackled how technology can be harnessed in order to provide more access to justice for the province’s disadvantaged. In a recent TAG survey of 1,500 Ontarians, 54 per cent said the justice system is out of reach and 78 per cent said it was old-fashioned.

The same survey found that only 26 per cent of respondents consulted the Internet when seeking legal advice.

“It’s getting to a point where, in some cases, information is only online or services are only online and that’s just not going to work,” she says.

The draft guidelines include a number of principles to help achieve greater access for disadvantaged groups without diminishing services for others. The guidelines include the idea of thinking about technology broadly — not just as software or hardware but also the design and process of using it.

Other guidelines include effective consultations using the proposed technology, as well as ensuring the selected technology is the most effective for the purpose and population it is meant to serve.

While an increasing number of people cannot hire a lawyer to help them navigate the system, Hughes says the reaction of the legal industry has been to give them the tools to do it themselves.

More online services have been popping up to help individuals find their way through the legal landscape, but this poses problems, as people who are represented by lawyers tend to have more success, Hughes says.

“The idea that people can just enter the system once or twice to deal with particular problems and understand it enough to get a fair result I just don’t think is realistic,” she says.

“The fact is it’s a complex system, and no matter how you try to make the system less complex, it will always be complex, because it has to account for so many variables.”

Hughes says the provincial government has not taken the time to properly consider such things when implementing new systems.

“Looking at what’s done on websites by the government suggests to me that this hasn’t necessarily been taken into account as much as it should have,” she says.

But Attorney General Yasir Naqvi says that services will continue to be available in person as the court system is modernized to accommodate those who are not able to access digital systems. Naqvi says technology is not going to completely replace traditional court services any time soon.

“Speed is important, but devising the right solution that actually works is even more important,” he said in remarks to the TAG event.

“And I just don’t want to be in a place where we take two steps forward and one step backward.”

The Ministry of the Attorney General expanded an e-filing pilot project in the Small Claims Court in the spring and is working to expand e-filing to other courts. The provincial government has taken an incremental approach to digitizing the courts and has been tepid about rolling out large, comprehensive systems since it scrapped an online system called the Court information Management System in 2013. The system, which would have been a portal for court functions, cost the province more than $10 million to develop before it was abandoned.

The executive director of nonprofit Urban + Digital, Gabe Sawhney, says implementing big, complicated systems to combat access to justice problems rarely delivers and that the legal industry should look at tackling small projects one at a time.

“That is a textbook incorrect way of deploying technology. It’s the exact opposite of how big tech companies deploy technology,” he told Law Times after a panel discussion at Access to Justice Week.

“They have processes that are very quick [and] very agile. They modularize their systems. They work on small chunks at a time and do them continuously.”

Osgoode Hall Law School professor Monica Goyal pointed to how the courts are being digitized in B.C. as a good example.

“They started with small projects,” says Goyal, who founded legal software company My Legal Briefcase. She was also a panelist at the event.

“Then if you fail, you fail in a small way. A good approach might be a number of small projects and at least one of those small projects will succeed instead of putting all your eggs in one basket.”

Once finalized, Hughes hopes her guidelines could play an important role in making sure providers iron out any potential problems early.

“I don’t know about you, but when I leave things till later, they’re sort of forgotten. I think that’s the danger,” she says.