Focus: Dispassion not an option for aboriginal lawyer

Across the road from the flashing lights and pings of slot machines at Casino Rama, Dianne Corbiere sits in her law office gazing intently at her computer screen. She has a kind smile and a welcoming way about her. But once she starts talking about aboriginal law, she quickly becomes impassioned as she reveals the fighter within. 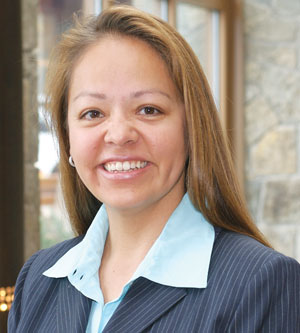 “I think if people were really honest and really looked at the history of indigenous people, they would be on our side because I think the law is now on our side,” she says.

Since her call to the bar in 1998, Corbiere has been successful in advocating for aboriginal rights. Last year, Canadian Lawyer magazine named her one of the top 25 most influential lawyers in the country. She’s a past president of the Indigenous Bar Association and past chairwoman of the National Secretariat Against Hate and Racism in Canada.

But the prosperity of places like Casino Rama is very different than the reserve where Corbiere grew up on Manitoulin Island as part of the M’Chigeeng First Nation.

“It was quite an impoverished upbringing as far as material things,” she says.

Corbiere says her mother would go down to the lake, even in the winter, to bring up water so they could take baths.

Her father, who worked in the mines in Sudbury, Ont., lived off the land by going hunting and trapping even though her family lived on the reserve. She grew up skinning beavers and muskrats and “going out on the trapline with snowshoes going hunting with my dad.”

Despite these circumstances, Corbiere says the lack of material wealth didn’t matter. She says she grew up with the kind of learning that went with knowing about her people’s customs, traditions, and practices that grounded her through everything she has done since. “The poverty was pretty striking, but I have to say that I was rich in the sense that I had a real strong knowledge and connection about my Ojibwa background.”

After obtaining a bachelor of social work at Laurentian University, Corbiere went to law school at the University of Toronto and graduated in 1996. While her classmates may have been pondering which area of law to pursue, she never wavered from her goal of going into aboriginal law.

She ended up working for David Nahwegahbow in 1995 after her second year of law school. She has been working with him ever since and became a partner at the firm in 2000.

Corbiere believes a lot of people think they have to be dispassionate about the law and just represent their client’s interest in order to be an effective lawyer. “But with respect to the reconciliation of the relationship between First Nations and the Crown, I don’t think you can do that anymore.”

Part of Corbiere’s frustration with the law is that although the royal proclamation will be 250 years old this coming October, “there has not been a stitch of dirt recognized as aboriginal title by our courts in this country.”

She hopes the upcoming Supreme Court case involving Roger William and British Columbia may change that.

The case arises from the Xeni Gwet’in and Tsilhqot’in First Nations claim for aboriginal rights, including aboriginal title, to land in the Chilcotin region of British Columbia. While the Court of Appeal found entitlement to aboriginal rights when it came to issues such as hunting and trapping, it reversed the lower court’s finding of aboriginal title to the land.

The appeal court viewed the claim as being one for a broad territory rather than a site-specific assertion of title. “A title site may be defined by a particular occupancy of the land (e.g., village sites, enclosed or cultivated fields) or on the basis that definite tracts of land were the subject of intensive use (specific hunting, fishing, gathering or spiritual sites). In all cases, however, aboriginal title can only be proven over a definite tract of land the boundaries of which are reasonably capable of definition.”

Corbiere notes the court’s discussion on boundaries, which includes having to put up fences and people segregating themselves, “doesn’t reconcile very well with some of these indigenous nations.”

Following the decision, the chiefs-in-assembly of the Assembly of First Nations stated in a resolution that the appeal court’s “limited definition of aboriginal title is a huge and potentially disastrous step backwards for Crown-aboriginal relations that will never be accepted in any way by First Nations across Canada and will only heighten conflict and uncertainty.”

Corbiere agrees the decision was a step backwards. “Think about the frustration of indigenous people living on these little postage-stamp reserves in Third World conditions still wanting to believe that Canada is capable of reconciliation.”

The Supreme Court has tentatively scheduled the case for a hearing on Nov. 7.

While she sometimes talks with her husband about retirement, Corbiere isn’t leaving the profession any time soon. “My favourite thing to do is to hang out with my people and to be around them. No matter how tough it is, we can all still laugh and there’s this drive that they all have for the improvement of Canadian society.”