Focus: Are drones the next tool for private investigators?

When Amazon.com Inc. chief executive officer Jeff Bezos dramatically predicted on 60 Minutes that within a few years drones would be zigzagging across cities delivering packages, many people took notice. 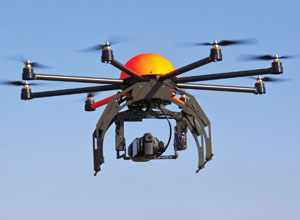 Up until that point, most people only associated drones, also known as unmanned aerial vehicles, with the U.S. military.

But unmanned aerial vehicles have a number of domestic uses and are already revolutionizing many industries, including filmmaking and agriculture. Private investigation may be next.

However, a number of issues, including regulatory delays, privacy concerns, and the lack of clear guidance from the courts, mean most private investigators remain leery of using drones, at least for the moment.

Soon after the Bezos announcement, Denis Gagnon, president of BCS Investigations, a private investigation firm based in Vancouver, began talking to a professor at the British Columbia Institute of Technology who was working on unmanned aerial vehicles.

“One of the professors there was developing a prototype, and I was going to use it,” says Gagnon.

But Gagnon soon discovered that regulations around the private use of drones remain onerous in Canada.

“You need to be licensed with Transport Canada, which I didn’t know at this time,” he says.

According to an article by Sarah Fitzpatrick and Kenneth Burnett, lawyers with Miller Thomson LLP, Canada has had a regulatory framework for commercial use of unmanned aerial vehicles in place since 1996.

People flying a drone must have a special flight operations certificate from Transport Canada and must apply for it at least 20 days in advance. However, drones must remain within eyeshot of the user and each and every flight has to have an accompanying certificate.

Gagnon says that unless these requirements change, drones won’t make an effective tool for private investigators. “I can’t see myself applying for a permit every time I’m going to run a drone. That would be just impossible,” he says. “We need to be able to adapt to each situation very quickly when we’re working surveillance.”

However, if Transport Canada were to make the regulations less burdensome, Gagnon sees a large array of potential uses for unmanned aerial vehicles.

“It would be a fantastic tool,” he says. “A lot of the surveillance that we conduct is in remote areas like a farm or a rural property. You can’t sit there working surveillance because it’s too obvious.”

One of the biggest advantages drones could provide is getting visual evidence a party could present in a court case.

Gagnon gives the example of an internal theft issue where employees are stealing goods from a shipyard. “We would be able to run a drone and be able to observe what’s going on in the shipyards, which you can’t really drive in right now,” he says.

“But the nice thing is we could drop in close enough and zoom in on the labelling on the container.”

The drone would then be able to covertly follow the container wherever it went all the while sending a live video feed to a private investigator’s computer.

Gagnon says that while private investigators have a number of sophisticated technological tools at their disposal, most of them require operators to be carrying them on their person. That makes drones especially valuable.

As with many new technologies, however, privacy issues are inevitably going to become a concern. For instance, if someone is using a drone to follow a target in a car with someone else in it, would the investigator be able to record that person as well?

But Grace suspects privacy issues may end up smothering their usefulness. He points to closed-circuit TV cameras some private investigators used to use on surveillance targets. New rules, however, required them to blur the faces of any third parties caught in the images, making it onerous for them to use the technology.

“I don’t know of anybody that still uses those,” says Grace.

Gagnon, who says he also doesn’t know of any private investigators currently using drones, worries that if they begin prematurely trying them out or if Transport Canada gets the regulations wrong, there could be a public backlash against using them.

In addition, he worries drones could make it more difficult to do his job if they got into the wrong hands. “I don’t want the criminals to be able to watch me when I’m working surveillance,” he says. “So counter-surveillance and espionage are going to be problems.”

Gagnon is hopeful private investigators will be able to get an exemption from Transport Canada for their work. But he sees legal action as inevitable.

“We’re going to have a legal battle because the lawyers aren’t going to like having that tool in our arsenal. They already don’t like a lot of the tools we use already, never mind one more tool.”

Gagnon is optimistic about the potential uses of drones but is taking a wait-and-see approach.

“Drones are still, excuse the pun, up in the air at this point.”